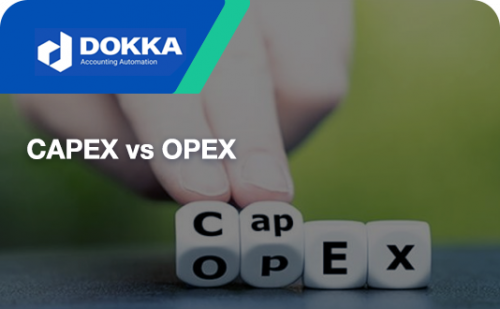 It’s no secret that running a business implies having a lot of different expenses. To keep things clear and organized, businesses usually split them into different categories like rent, raw materials, wages, and the general cost of growth.

The two major expense categories are CapEx and OpEx. Both are abbreviations for two different types of costs that mark long-term and short-term expenses.

In this post, we’ll go deeper into understanding what CapEx and OpEx stand for and what are the accounting differences between these two major categories.

Here’s what you will learn:

CapEx or capital expenditures are significant purchases of goods that a company uses to improve its future performance. Those are usually one-time costs associated with major projects or investments. Simply put, it’s the money that is invested to buy, improve, or maintain the company’s long-term assets.

Investment in things like buying a new building or upgrading the company’s manufacturing equipment is a capital expenditure. CapEx can also be used to finance research and development projects or to expand a business. In simple words, CapEx includes everything that can be considered a long-term asset, which means that a company expects to hold it for more than one tax year.

CapEx is a big financial bite for companies. To finance these large purchases, companies will often take out loans or sell bonds. Because it is a long-term investment, CapEx is usually spread out over several years, sometimes even decades. This allows companies to gradually recoup their costs and avoid taking on too much debt all at once.

Almost all businesses have some form of CapEx marked in their books. Types of capital expenditures vary across different industries. For example, a shoe manufacturer can buy land to build a factory, and all costs related to the construction of that new facility are capital expenditures. This assumes that it will take significant time to finish the building process and the investment will bring benefits only in a long run.

In another example, a company that develops a new proprietary technology product can invest in patents to secure authority over the product. In that case, the patents are capital expenditures because they are long-term, fixed assets for the tech company.

Fixed assets are depreciated over time to amortize the cost of the asset over its most useful years.

OpEx, or operational expenses, refer to the costs incurred during the day-to-day operations of a business. This can include standard costs like rent, utilities, labor, equipment, and materials.

In the early stages of a business, OpEx costs are typically lower than CapEx, but they can start to add up over time. As a result, many businesses try to keep their OpEx under control by carefully monitoring their spending and looking for ways to improve efficiency.

As it is the company’s current short-term obligation, OpEx can be deducted from the taxes only for the tax year when the expenses were incurred.

What are the differences between CapEx and OpEx?

There are a few key differences between capital expenses (CapEx) and operational expenses (OpEx):

Capital expenditures can be essential for business growth, but they can also tie up a lot of cash that could be used for other purposes, so it’s important to have a well-defined workflow for approving and tracking CapEx expenditures.

The first step of a workflow is to create a capital expenditure budget. This budget should include an itemized list of all the proposed CapEx projects, along with estimated costs and expected return on investment. Once the budget is approved by the appropriate decision-makers, work can begin on individual CapEx projects. Each project should have a clear purpose and expected outcome and should be tracked against the original budget throughout its lifecycle. By following these steps, businesses can ensure that their CapEx expenditures are well-managed and provide the intended results.

A key goal of any OpEx workflow is to streamline operations and minimize expenses. To achieve this, businesses typically use some combination of process automation, outsourcing, and workforce optimization. By automating repetitive tasks, businesses can reduce the need for human labor, while outsourcing can help to reduce fixed costs. Workforce optimization techniques can help to ensure that employees are working at peak efficiency.

One way to improve the efficiency of the OpEx workflow is to centralize all invoices and payments. This can help keep track of spending and ensure that bills are paid on time. Check out how DOKKA can help you streamline your payment processes, improve the efficiency of your OpEx workflow and give you better control of the costs of running your business.

What Is Cost Accounting? Definition, Examples and Types

The CFOs Guide to Managing Remote Employees in 2023